Join the Alliance
Thank You!
Your submission has been received!
Oops! Something went wrong while submitting the form.
close 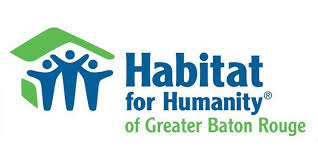 Habitat for Humanity of GBR

Habitat for Humanity of Greater Baton Rouge builds and renovates houses in partnership with the community. We provide opportunities for families in need to purchase their own homes and improve their lives. We help build the community by involving diverse religious, social and business groups in the construction of homes and neighborhoods.

Habitat for Humanity of Greater Baton Rouge works in partnership with low-income families and the community to eliminate poverty housing. Habitat is not a handout but a “hand up.” Homes are sold to partner families at no profit and financed by Habitat with affordable, no-interest loans. The incomes of those selected fall within the range of 27% to 60% of median family income for the parish where they live.

The building capacity of Habitat in Baton Rouge has consistently increased over our 31 year history with 70% of our homes having been built in the last 15 years. Habitat typically completes 10-15 homes per year. In response to Hurricanes Katrina and Rita and the tremendous need in our community, the affiliate built 46 homes in 2006. In response to the 2016 flood which damaged over 142,000 homes in South Louisiana, we gutted almost 100 flood damaged homes and completed 25 Rebuilds with community homeowners in need. Habitat has also completed 40 Critical Home Repairs on existing homes for low income families. We have built homes in six parishes – East and West Baton Rouge, Ascension, Iberville, Livingston and West Feliciana.

Since 1989 more than 80,000 volunteers have worked alongside Habitat homeowner partners and their families and friends to end poverty housing in the greater Baton Rouge community.

Our team is working hard to improve housing, neighborhoods and communities for families.

Learn About Other Organizations

Making sure everyone has a voice.

Learn More About Housing 1st
Meet the Alliance
Learn from the Advocates
Frequently Asked Housing Questions
Connect with Us
To get in touch email
info@housing1stalliance.org
anytime.
Copyright ©  Designed by Marlee Pittman